As a full accredited member of The Association of Pet Dog Trainers (www.apdt.co.uk) I am able to display this symbol.

Gosia Bates (Lehkunow) is 37 years old, moved to the UK 13 years ago and has been living and working with dogs since... she can remember.

When still in Poland, she was extensively cooperating with animal shelters and rescue organisations fostering, training and rehoming dogs, 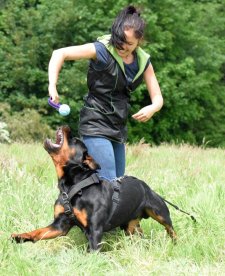 not all of which were well-behaved and easy to handle. She's gained a lot of experience with dogs of all shapes and sizes, from Miniature Dachshund to Great Danes.

In 2009 she moved to London to study dog training and animal behaviour, which was not available in Poland at the time, and is actively interested in modern, reward-based techniques of training. Since moving to the UK she’s been doing various courses, attending seminars and conferences to learn from the very best in the field like: Daniel Mills, Ken Ramirez, Patricia McConnell, Ian Dunbar, Marc Bekoff, Claudia Fugazza, Victoria Stilwell and Brenda Aloff, Turid Rugaas, Chirag Patel, Susan Friedman, Kamal Fernandez, Jo Hill, Craig Ogilvie, Alexa Capra and Denis Fenzi. Gosia is a certified dog trainer and a member of the Guild of Dog Trainers (Master Trainer) and the Association of Pet Dog Trainers, UK (01290) and a full member of The Institute of Modern Dog Training. Dogs & the City has the Kennel Club Listed Status and hosts The Kennel Club Good Citizen Dog Scheme.

Gosia firmly believes that training methods should be matched not only to particular dogs' temperaments but also to their owners' skills and abilities and therefore she does not support one fit-for-all training philosophy but approaches every situation individually instead. She also believes that a dog's happiness and well-being is at the centre of her work.

In 2013 she moved from London to Scotland and opened a new branch of Dogs & the City in Livingston.

When living in London, Gosia was a volunteer dog assessor, home checker and fosterer for German Shepherd Rescue Elite and Rescue Remedies and since she moved to Fife, she has been volunteering in one of the Scottish branches of Dogs Trust and Staffordhire Rescue Scotland.

Gosia’s German Shepherd, Ivan, who had been an invaluable helper during training sessions for years, sadly passed away in June 2015 and now she shares her life with Mia the pocket-rocket Staffie from Battersea Dogs Home, Gonzo, an amazing Rottweiler that’s been a true inspiration for so many new projects over the past 4 years and Rita, a Papillon puppy and a future agility star.

Gosia is police-checked and fully insured with Pet Business Insurance.

The last 2in1 course this year

Gosia has looked after our cat Thomas on a number of occasions now. It is great to go away and leave him in his own home, with the peac...

Sam and Giuliana Weston with Hetti

Gosia and her team were fantastic at helping us train our pup. They clearly love dogs and were very patient with our excitable cocker s...

I'm so glad to have found Gosia and Dogs &the City! I couldn't feel more sure that my dog is in safe and confident hands and that h... 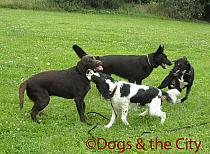